The very first thing you should know about this project is that it is haunted. I thought it would be a great idea when it first occurred to me that I could spread a celebration of tarts throughout an entire year. I didn’t, however, consider how difficult that might be when you’re surrounded by ghosts.

This is also something I overlooked when I purchased the slightly run-down bar in Scurvytown. I thought it would be a great adventure, owning a bar and grille in this quaint little resort town on an island of the same name. Mostly, it has been a bit of a nightmare, and that is primarily because of the ghosts who haunt my bar, The Boneyard.

Battling heartbreak the way I have, pretty much my entire life, I am of the philosophy that there’s nothing wrong with buying yourself flowers. Unless of course you try to have fresh flowers sitting on every table of your bar and grille in a place that is overrun with ghosts.

As you can imagine, the ghosts are not fans of fresh flowers. Instead, they are much more impressed by flowers that look like this: 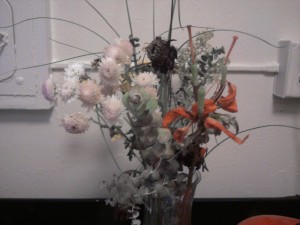 I have adapted because of the ghosts and their many daily demands. I am pretty sure that theme will be a prevailing one as I get deeper into this project.

As I bake my way through the year, I thought it would be fun to celebrate the fruits and vegetables while they are in peak season. I thought about January, and nothing really excited me. The other morning I was eating a banana in my cereal, and I realized that banana pudding sounded delicious. “That’s it!” I declared, excitedly, “I’ll do a celebration of pudding!”

I should have kept the thought internal, because most of the ghosts within earshot laughed at me, and then immediately covered the kitchen in their own special brand of pudding: bright yellow gooey ectoplasm. Ignoring the cackling of, “Taste it to see if it’s bananas!” I set to work scrubbing the kitchen, and brainstormed my January pudding theme. And no, I didn’t taste it.

I started off with a good crust, which I procured from the Smitten Kitchen. My only concern with this recipe is her use of an entire egg. Had I read the asterisk (oops, a rookie mistake which I don’t usually make), I would have started off with just adding in the egg yolk, and maybe adding a bit of ice cold water if it was too dry. Instead, I ended up having to add more flour because the addition of an entire egg made my dough too moist. Easy fix, and it was still delicious, but it could have been a baking disaster. 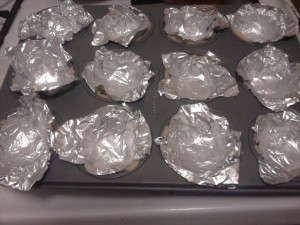 How to cope without pie weights.

This is what my pan looked like pre-oven, per the directions. I wanted to make a bunch of mini-tarts, and succeeded in that; however, I have since moved up in the world from a muffin pan to actual smaller tart pans. I am very much looking forward to testing them out on this week’s endeavor.

For the pudding, I was going to use this recipe, but decided to take the easier route with boxed pudding. I know, it was a cheater’s move, but at least I used Cook ‘n Serve over Instant! 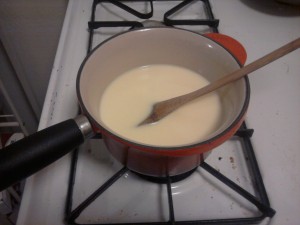 Must watch this pot for boiling!

It seemed to take forever for the pudding to get to a boiling point, but that is what happens when you have to watch the pot. Pudding involves nearly constant stirring, because of its rather delicate nature, so stir, stir, stir, until that boil arrives. Okay, that sounded gross, and please ignore the fact that vanilla pudding has a pus-like color, because that just makes it worse. I wonder if I’d boiled it a bit longer, if mine would have set better. I shall be testing this out, of course. 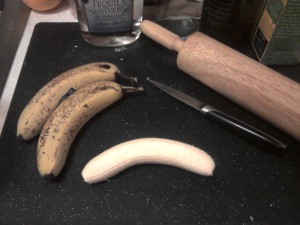 Next came the bananas, which I had let ripen as in the photo above, not too soft and smushy-gross, kind of perfect cereal bananas. And then, well, this photo speaks for itself: 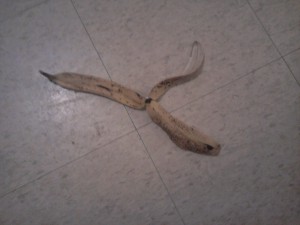 The ghosts play a mean trick.

Luckily, I saw this before I almost stepped on it. Honestly, the things I have to put up with!

Moving on, I added the bananas when the pudding was still warm, but I think I might have wanted to add them in afterwards, because they got kind of smushy. Anyway, I then dumped the mixture into the baked tart shells, and then added the meringue as per the pudding recipe above that I neglected to make. 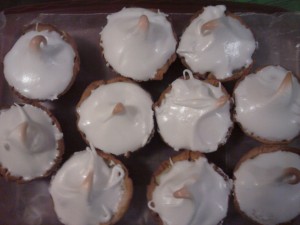 And for show, just one tart by itself: 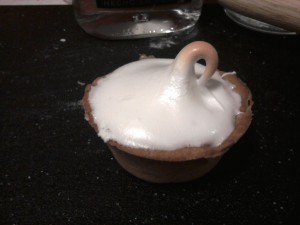 It was utterly delicious! Final note: make sure to serve right away, as the structural integrity of the meringue does not last long! Happy tarting!