Last week, I filled the very last page of a writing journal I’ve been keeping since Fall 2008.

In the early pages of the journal is a little story that I wrote while sitting in the waiting room at my dentist’s office. The story is called, “All Tomorrow’s Pirates,” and it’s about a pirate named Captain Tullis who hasn’t been a pirate for sometime, due to his dedication to rampant drunkenness, and is stuck in the middle of his intervention, daydreaming about his escape from the awkward confrontation.

A year and a half after I wrote that, Scurvytown was born. Funny how an idea festers in the mind until it’s ripe and ready to be produced into something more. I am really happy with the way Scurvytown has progressed. I embraced fearlessness by posting raw content, barely edited (and at times painfully so), because I knew it was a good idea. I always considered those first few posts as “season one” of a fledgling series. I think that taking a little break to re-group and develop some ideas was actually a vital part of the writing process.

Part of the writing process of course is reading a lot and journaling; both of these are things that I tend to slack on as a writer. When I got laid off in November, I decided to re-group my entire life, and that meant starting to do this writer thing right, and that means reading more and writing something, anything every single day (and social media blatherings only count when I need something for my sentence-a-day project).

When I completed those last blank pages in my current writing journal, I was thrilled. Since I recently moved to a new place, I discovered my collection of notebooks that have served me well as writing journals, dating back to 1995, when I was a senior in high school, and had just started taking college classes. I took a photo (but have since filled in some of the gaps with 2 other notebooks I found). 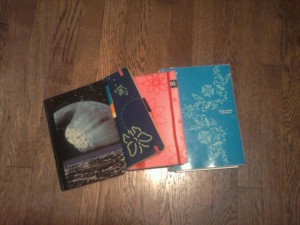 The meteoric journal was a Christmas gift back in 1995, and it is filled with silly ramblings of a teenaged me. The book is half-way filled, and stretches out all the way to 1998. Now, I have since found a writing journal I kept for a college creative writing class from 1997. The saddest entry in this journal is the last one. I have a card from my great-grandmother’s funeral marking the page, and a soul-crushingly sobtastic entry about coping with epilepsy that reveals to me now that I was so very lost when I was that over-medicated.

Next is the blue butterfly journal, which starts in 2001. (Side note- I found a poetry journal that is different from all my other poetry notebooks that actually is from 2000). The blue butterfly book is half-way full and actually has a lot of interesting thoughts about life when I was begininning to pull myself back into the world, working at the glue factory, and applying to graduate school for the first time. I didn’t get in, but I made a waiting list at a very prestigious school in Massachusetts. I feel now that I was lucky not to get accepted at the time, because I’ve oddly developed my writing so much differently on my own than I would have through traditional educational means. I’ve lived my life the hard way, messing up a lot and making a lot of mistakes. I’ve learned so much from these mistakes, that I feel like it outweighs the education I might have received 10 years ago. I am a late bloomer in so very many ways that I truly feel I was not ready for graduate school then, but I certainly am now. Once again, I feel the need to mention how much I love the program I am currently enrolled in at Northern Kentucky University. It definitely is the right school for me, and I found it at the perfect time in my life to complete my metamorphosis from a just getting by slack-about to a serious writer.

The first part of the radioactive pink book is Chapter 13 of my 2004 NaNoWriMo work, “Jane of the Waking Universe.” The title of the work is a Guided By Voices song, one of my favorites. Excerpt: “What was it about dying that made Jane so thirsty?” Cool chapter, it’s called “Blood,” and it’s all about sisters, which is something I know very little about, other than being a sister to 5 boys. Lots of poems and ramblings later, and 2005’s NaNoWriMo also makes an appearance in this journal. I forget the title of this one, but my main character’s name was Mericat Preud’homme, and it was my very first time-travel novel. There is a single entry at the end from 2006, one from 2007, and one from 2008. The 2008 entry is kind of amazing and is what made me realize that I need to do a blog series on the ridiculous and funny things I discover about myself and writing throughout the years.

Oh yeah, that’s right, blog series! Because once this entry hit 600 words, I was already pretty sure there was more to this than a single blog entry can cover. Yay!