For the past few weeks, my trips to the park have been very peaceful. That changed a couple of weekends back when the cherry trees blossomed. Just after that, I started writing this post, but the priority of finishing it dwindled, and here it sat, tab open, unfinished. Roughly 10 days later, I am finally finishing the piece I started.

The weather was perfect that weekend, and the expected crowds arrived in drones, as did the bees. (pause for pun groan). It was the weekend of April 11th. I headed to the park on Friday night (the 11th), to catch a glimpse of the cherry blossoms, even knowing I was planning on heading back in the morning. A couple of people had tied hammocks between some trees and were just chilling in the grove. There were photographers, some professional-seeming, some much less so (like me), and then there were the folks taking snaps with their phones. 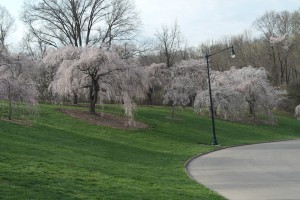 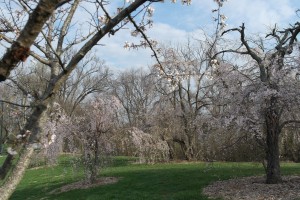 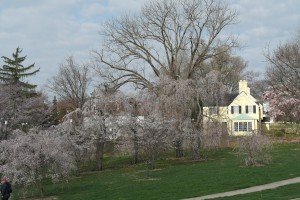 I didn’t quite capture the awesomeness of the cherry blossoms with my camera. Never could quite catch the light how I wanted. On Saturday morning, the park wasn’t quite overrun with people, yet, but it was starting to be by the time I finished taking my final snapshots.

I don’t much care for the park when it’s crowded. I prefer to go there early, while most folks are still asleep. Selfishly, as I walk through the gardens, I like to think of it as my park. It’s a nice feeling, especially walking through the gardens, basking in the hard work of keeping them weeded and gorgeous, without having to have lifted a finger to make them so. And still, there’s the decay. Currently, decay gives way to new growth, which slowly turns into fresh decay. Which keeps me coming back to the park to observe more nature. So I took a few snapshots of some of my favorite things at the park. 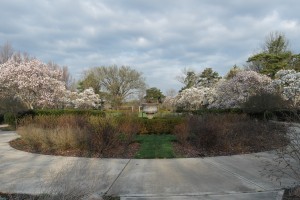 This is the garden surrounded by magnolia trees. On the day I took this photograph, the petals were beginning to fall, and the smell of them in random states of decay was overwhelming, so much so that I thought I might actually have to stop and take a puke break in the nearby shrubbery. The moment passed, and I got used to the intoxicating perfume of the flowers, and then moved on to other sections of the park.

I call this shrub “the sweetgum catcher,” as it has managed to snag a few sweetgum fruits from the nearby trees and keep them save in its branches all winter long. 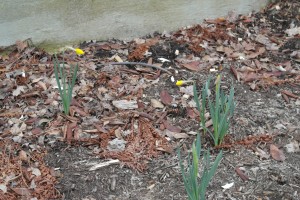 Here, I saw two daffodils that looked as though they were about to have a swordfight. 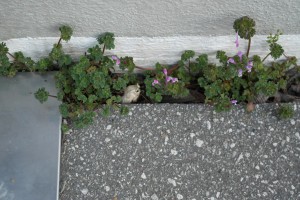 This is at the top of the pavilion, flowers growing in between the stones of the steps. This, I admire in the plants, a meager attempt by nature to reclaim the pavilion. 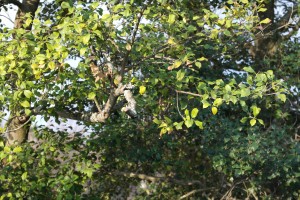 This is hard to see quite what I was taking a photograph of. I really do need to upgrade to a better lens for taking closeups. And a better lens for far away shots, for that matter, but I am saving up for one at a time, like a smart, thrifty person. I saw this interesting growth on several of the Ilex (Holly) trees in the area, and tried to get a few photos of it, as a reminder to look into whether or not there is some kind of blight on this tree. 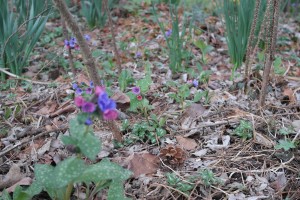 Lastly, as I walked through the “Garden of Old Trolls,” I spotted this two-toned flower. I thought it was lovely, and again, enjoyed the balance of decay and new growth in this little scene.

The next time I went to the park, it was later in the day than usual, and it was so crowded, I felt almost uncomfortable, so used to the silence and having the place to myself. So I decided, on a whim, to check out the nature trails before doing a quick walkthrough the gardens. Next time, I won’t do that without my fancy hiking boots on, and I’ll remember to bring water as well, and to apply sunscreen to my pale, white Irish/German flesh. Until then, I shall decay at my current rate, and watch the world as it spins the same.