I went to a Zumba class this morning. It was at a Jewish rec center, and offered through a Yelp event to introduce folks to different types of fitness classes in the area throughout the month of March. Out of the classes offered, this was the only one I actually thought I could do. I had to skip out on skating (because that is how I break bones), and aerial silks and rock climbing (simply because I currently lack the upper body strength for such things). I also skipped the yoga offerings, because, eh, yoga, not really my thing. If I am going to bother going to a fitness class, it is going to be dance related, and I am going to shake dat ass.

I noticed a sort of awkwardness around the room when I walked in. The event station had a check-in gift of a free water bottle, so w00t for that. There were the rec center’s regulars and the invasive Yelpers. You could tell the difference not just from the name labels of the Yelpers, but because we all hung out around the periphery of the room until class started. The regular rec center folks were spread out across the room, probably in their usual spaces.

Almost everyone who was there was wearing black or dark grey yoga/workout pants. A few ladies had on shorts. I was wearing bright blue yoga pants, a purple shirt that totally clashed with it, and of course, there’s my bright blue hair. Without the crazy hair color, I would have been a stand-out in this crowd anyway for subverting the apparent fitness class boring-ass dress code. And not even for being the fattest one there. That might have been a tie between me and some lady up front, but whatever, who even cares about that, right? Okay, me, a little bit. Because I like being that fat girl who is dancing her ass off, from start to finish of the class.

A fellow Yelper came over and asked me about Zumba because she’d never done it before. I told her, “It’s pretty fun, I have done it before. Pretty much just aerobics with some flair to it.” I managed to refrain from making an awkward statement about how Zumba sometimes feels kinda racist. Once the music started, I proceeded to dance my ass off. Sometimes, they go too fast or the steps are difficult to follow, but if I have learned anything at all from my burlesque instructor, it is to just keep going with your head held high, confident with whatever moves you are making. And anyway, it all moves so fast, no one will see you when you frak up, because they are too busy trying to follow along, too. There was a moment during this one song that had a line about taking your shirt off, and the dance move mimed stripping and twirling your shirt around your head. I really, really wanted to just go for it, take my shirt off for real, twirl and toss it, but I thought, “Lauren, no. This is not burlesque class. Be good.” Let me tell you, being “good” feels pretty stupid a lot of the time.

After the class was over, and I was dripping with sweat, as I walked back to my car, I thought about my unique blue pants in a sea of black/grey ones. I loved that I stood out, that I didn’t match the crowd. That all these other ladies got up and dressed themselves in the bland boring standard workout pants, and I put on bright blue ones. Of course I did the unique thing. And something about standing out against that, made me dance harder, made me more confident, enjoying every moment of this imaginary subversion.

I drove to the park afterwards to check on the progress of growth and decay, and it was more crowded than usual. I wished I had been able to go on Saturday, but it rained all day, and I had to work an event in the morning anyway. I wished, then, that I had gone to the park before Zumba, that maybe it would have been less crowded. But then I also wanted to see the angle of the sun after noon, how the shadows fall a little later in the day than my usual exploration time. So if I had to share that massive green-space with more people than usual just to see that, so be it. Kind of silly of me to wander through it like I am all alone anyway.

The first photograph I took was of a newly budding tree. I really like the way this photograph turned out. It has a somewhat dizzying effect. 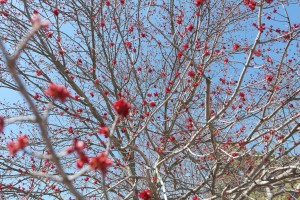 The next photo that I really took time to shoot was of this purple flower. I honestly don’t even know what it is, which, I know, terrible botanist. There was just something that reminded me of me in this flower, a feeling of it subverting nature, which, clearly it isn’t. It is just a flower growing. Poo on me for trying to personify it, for trying to own it. 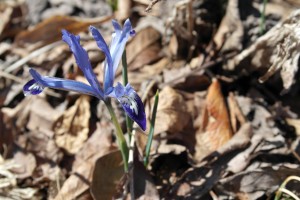 The next photo was a study in shadow. Of the midday sun contorting the shadow somewhat, making it pudgy and rounding it out. 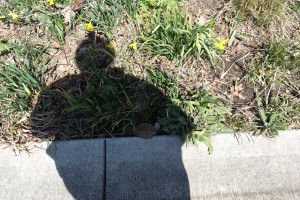 And last, before leaving the park, I visited the “Garden of Old Trolls.” I found a lock and key underneath a shrub while I was wondering around. Pretty sure that is going to help me write the story that my brain is dying to unlock. I observed the sign more closely this week, and discovered that the back and front sides match. Three weeks now, and I had assumed that the back of the sign was flat. Sometimes, being wrong is pretty awesome. 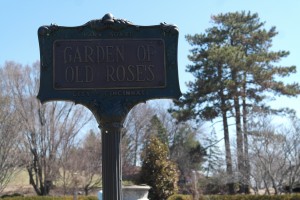 As I was making my last trip around the “Garden of Old Trolls,” an older lady in a bright peach jacket who kinda looked like Rose from The Golden Girls told me my blue hair was fantastic. That is when I realized I hadn’t brought my MP3 player into the park, that I had observed it fully, not introvertedly in my bubble of my own sounds and thoughts. I also smiled at that lady and thanked her. I thought, “Now that lady gets it.” Whether she complimented me for the reasons I would like to think, I will never know. But I like to think it’s because it is true that when you get older, you truly understand that giving zero fraks and dressing how you want, doing your hair how you want, and being who you want is the best. Life is too short to not do that awesome thing you want to do. I mean, that is what I got out of it. Maybe that lady just really likes this shade of blue. But then again, there is always more to something than its surface layer. I am not just the lady who wore bright blue pants to Zumba class and then shook dat ass the whole time, with a smile on my face. I am confident, I am happy, I am unique, and I am infinitely more complicated than all of that.